The southern skua, also called the brown skua, is the only species of skua breeding in the New Zealand region. Although also breeding elsewhere, less than 500 pairs breed annually in New Zealand. These birds breed on most subantarctic islands, as well as on islands off Fiordland, Stewart Island, and Chatham Islands. This species might sometimes be misidentified as the south polar skua. 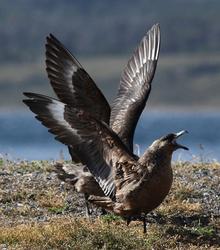